Young Women in Energy Fill a Niche in the Market

The Young Women in Energy group has found a niche in the market and continues to experience strong growth in its membership.

“We’re finding that the membership has grown a lot globally. So we’re finding that while people can’t necessarily attend our actual events in person there must be some sort of niche that’s not being met globally for that,” said Katie Smith, executive director of the group.

“We’re actually tailoring our next kind of one, three, five-year strategy to maybe go online, offering some content where people can do it outside of the physical city,” said Smith.

YWE hosted the Luncheon Thursday on Committing to Diversity and Inclusion which was held on the final day of the Global Petroleum Show at Stampede Park’s Rotary House.

Speakers were from Fluor and Deloitte who focused on strengths, weaknesses, opportunities and challenges with their current employee resource group.

Smith said membership is free for women who either work or live in Alberta, working for or with an energy company. 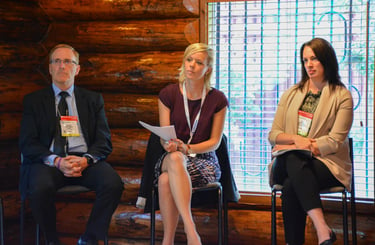 “That can be whether you are an end user or you’re a services-based organization. So we’re across all disciplines anyone from engineers and lawyers and consultants and marketers and geologists. We’re everything. We kind of offer the industry-wide approach.”

The organization was founded because of a feeling that this demographic wasn’t being represented in the industry.

“There’s a lot of women leadership content and development opportunities but they’re typically for women who are already almost at the board level and we weren’t hitting that emerging leader capacity,” said Smith.

“So the comment that we always get is what is young. And young doesn’t necessarily mean young in age. It means young in your career. You’re kind of at that tipping point to get past middle management maybe into a really senior role where maybe you could really affect change within the organization . . . We’re really trying to be a catalyst to not only increase how many women are in the industry but actually where they go and their leadership potential to actually be seen and recognized and be at a high level.”

By submitting this form, you are subscribing to receive email communications from dmg :: events' blog. Please note you can unsubscribe from these communications at any time.

Get Updates
[fa icon="chevron-up"]Back to top